Wow! St Patrick’s Day has really grown into a pretty big global celebration! What started out as a religious holiday honoring Saint Patrick for bringing Christianity to Ireland, has evolved to all sorts of St Patrick’s Day traditions around the world, even in places you’d never guess.

Some traditions are very similar to one another and some are unique in their own way. Either way, these traditions are amazing and I think it is so fun that Ireland’s national holiday is celebrated not only in its own country but around the world too.

I am so excited to share with you how fun and creative people are around the world with this holiday that now seems to celebrate all things Irish. You can view my sources by clicking on the italicized words.

According to Tourism Ireland, 44 countries participated in celebrating St Patrick’s Day in 2017, and 267 major landmarks and sites were lit up green! Below are just a few. Enjoy!

Places that like to light it up green as a tribute to the Irish! 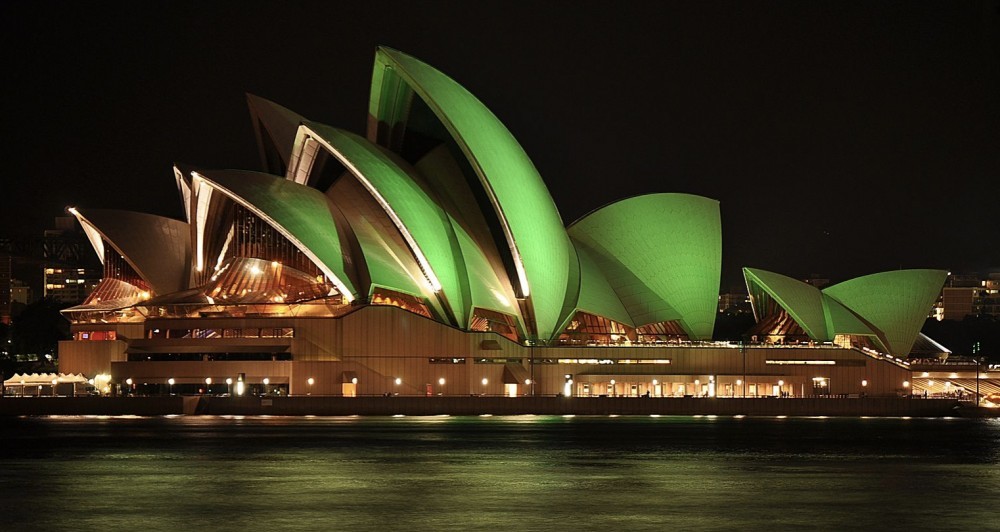 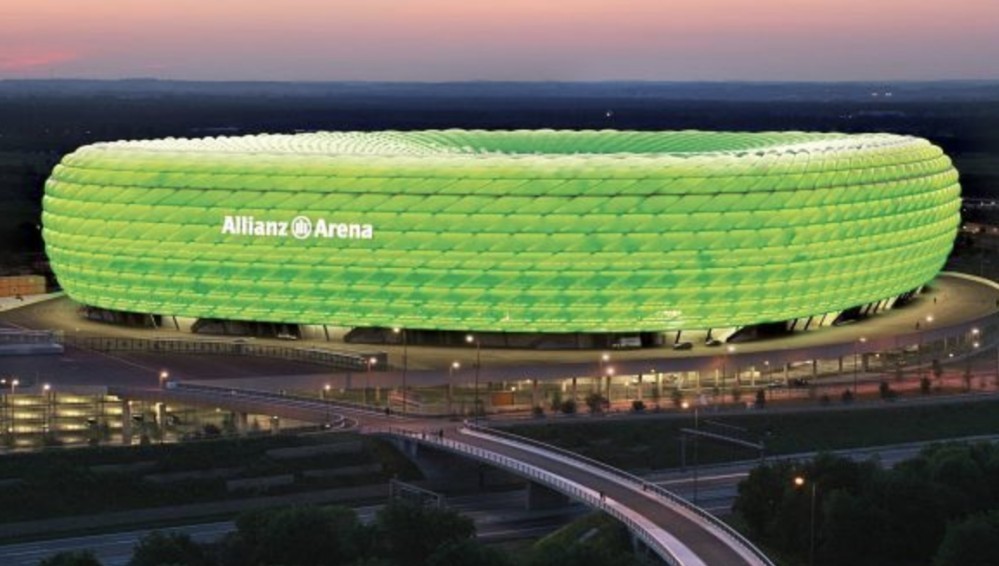 A few other popular landmarks known to light it up green have been the Great Wall of China, Rhine Falls, the Roman Colosseum, the Leaning Tower of Pisa, Niagara Falls, the Pyramids of Giza and the Sphinx in Egypt and the Welcome sign in Las Vegas, Nevada. To view the full list click here.

How did it become a global celebration?

St Patrick’s Day used to be observed in Ireland as a religious holiday.  The purpose being to honor St Patrick, a man who dedicated most of his life to teaching the Irish people about God. He died on March 17th, 461, which is then believed to be the day he went to heaven. As a result, it was the day chosen to honor him and what he did.

Since St Patrick’s Day is on March 17th, the holiday always occurred during the Christian Lenten season. So traditionally, the Irish would observe the day by attending church in the morning and then spending the afternoon in celebration with dancing and feasting together. 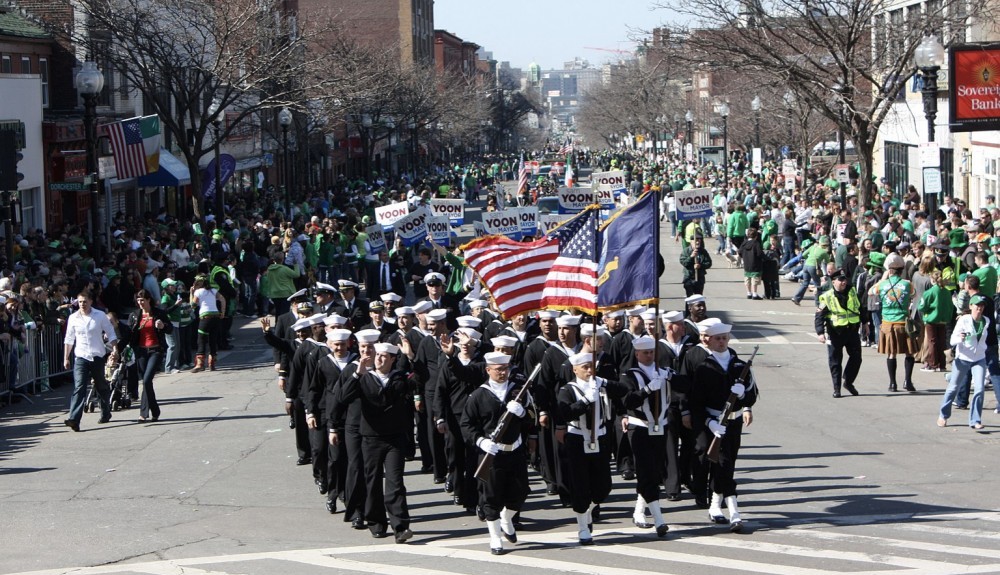 This Irish tradition made its way to America when Irish settlers arrived, mostly along America’s east coast.  Approximately 24% of the population in Massachusetts claims to be of Irish descent. This makes Massachusetts the “most Irish” state in America.

This large number of Irish decedents probably has a lot to do with the fact that Boston is where the world’s first ever St Patrick’s Day Parade was recorded. It was held in 1737 and was hosted by the Irish Society of Boston.

Today, the parade in Boston attracts almost one million spectators. Many other towns throughout Massachusetts have their own parade as well. This photo was taken during the Boston, Massachusetts Parade. Photo Credit: Wikimedia Commons

Another city that also often gets labeled as the place where the world’s first ever St Patrick’s Day Parade took place is New York City, New York. The Irish soldiers serving in the English army held this parade in 1762 and it has continued every year since then. The parade brings approximately two million spectators and takes approximately five to six hours to complete!

One unique thing about the New York City St Patrick’s Day Parade is that all participants are on foot. This means, no floats, no balloons and no motorized vehicles, all of which are very popular in other parades. Though it doesn’t have these things that the other parades have, somehow it is still the largest, longest, oldest (consecutive years) and most attended St Patrick’s Day parade in the world!

Ireland did not have its first St Patrick’s Day parade until much later, in 1903 (in Waterford) and in Dublin (the capital) in 1931. Here is a photo taken of a more recent parade in Dublin, Ireland. Photo Credit: Wikimedia Commons

Between 1845 and 1849 Ireland experienced a horrible famine due to diseased potato crops. Many died of starvation or disease.  Millions of Irish residents fled the country looking for refuge, many of them arriving in America and Britain.
These Irish men, women and children brought their culture, traditions and love for St Patrick’s Day where ever they went. As the Irish population in grew in these places (mostly America), so did the celebration for St Patrick’s Day.

Slowly it evolved from observing their religious holiday to celebrating their home heritage, culture, traditions, and basically everything Irish. They did this by parading through streets, enjoying festivals, dancing, eating and drinking.

In addition to Ireland, two other countries hold St Patrick’s Day as an official public holiday. This includes the Canadian province of Newfoundland & Labrador as well as a little Island in the Caribbean called Montserrat.

Montserrat is also known as the “Emerald Island of the Caribbean” because of resemblance to Ireland (also called the “Emerald Isle”) and its Irish ancestry.  Both of these places also celebrate in the traditional way with parades and festivals, etc.

Something is Really Unique About These Places

What makes Japan different is that it does not even have many Irish descendants, like most of the other countries that 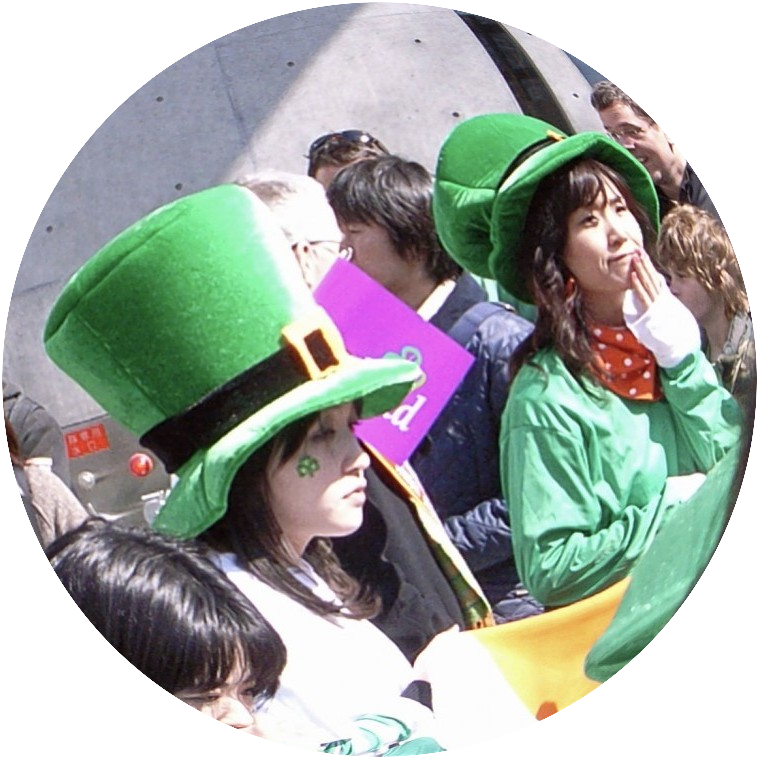 celebrate with parades and festivals. In 1992 the Irish Network Japan and the Embassy of Ireland introduced Irish culture to the Japanese people by putting on a St Patrick’s Day parade. It was so well-received that it continued as an annual tradition as well as the “I Love Ireland Festival”. This photo was taken at the Tokyo St Patrick’s Day parade in Japan. Photo Credit: Wikimedia Commons 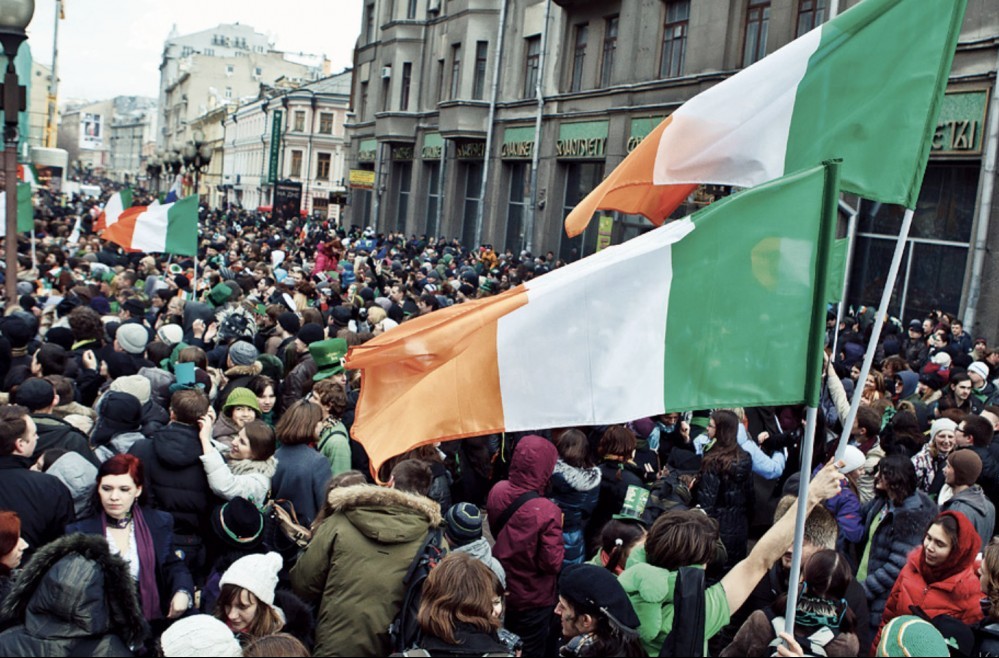 there!  On March 17th, Russia celebrates Irish culture like most of the world, with a parade and festivities.  However, the Russian Orthodox Church uses the Julian Calendar which has a difference of approximately two weeks.

So for them, St Patrick’s Day is actually on March 30th, which is observed as a religious holiday in honor of Saint Patrick and his mission work in Ireland. 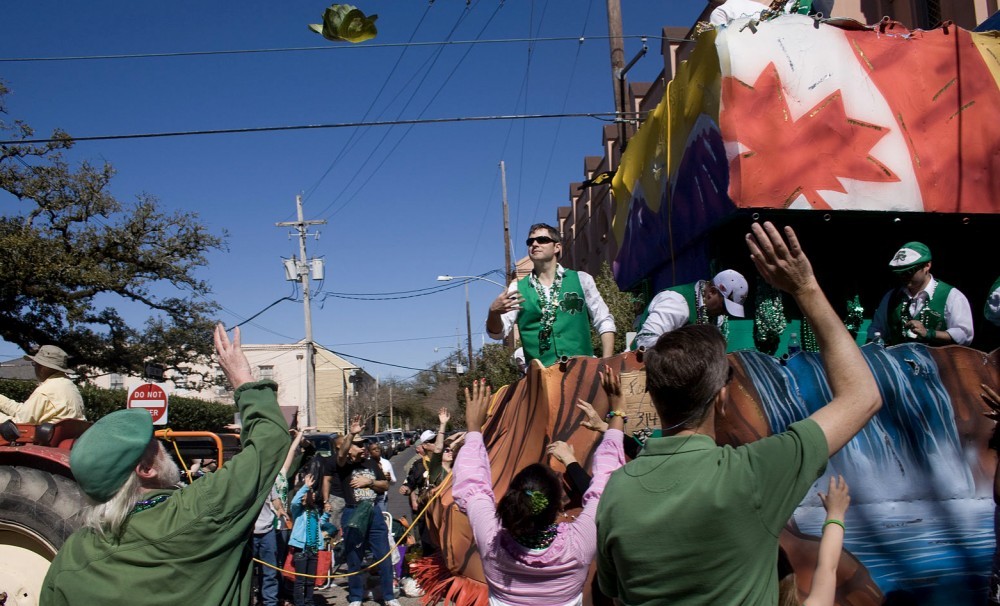 In New Orleans, Louisiana they also celebrate with parades. However, their parades are a bit different. They throw vegetables from the floats to the spectators.

By vegetables, I mean mostly cabbages, potatoes, carrots and onions. One may also find an occasional moon pie, a sweet treat also thrown from floats in the Mardi Gras parades in New Orleans.

This photo of a man throwing cabbage to spectators was taken during the New Orleans parade. Photo Credit: Wikimedia Commons

So why do they throw vegetables in New Orleans? During the Irish Potato Famine (mentioned above), the Irish people ran out of their main staple food, which was potatoes. Their next staple food item was cabbage.

As a result, the Irish ate a lot of cabbage and bacon, which became their traditional dish. Once they arrived in America, bacon was actually pretty expensive so they switched the meat choice to corned beef.  Corned beef and cabbage is now considered an American Irish traditional dish.

Another source states that the tradition of throwing vegetables goes back to the days when St Patrick’s Day was celebrated as a Catholic feast holiday in Ireland. It was not uncommon to see the rich throw food (probably mostly vegetables) down to the poor. 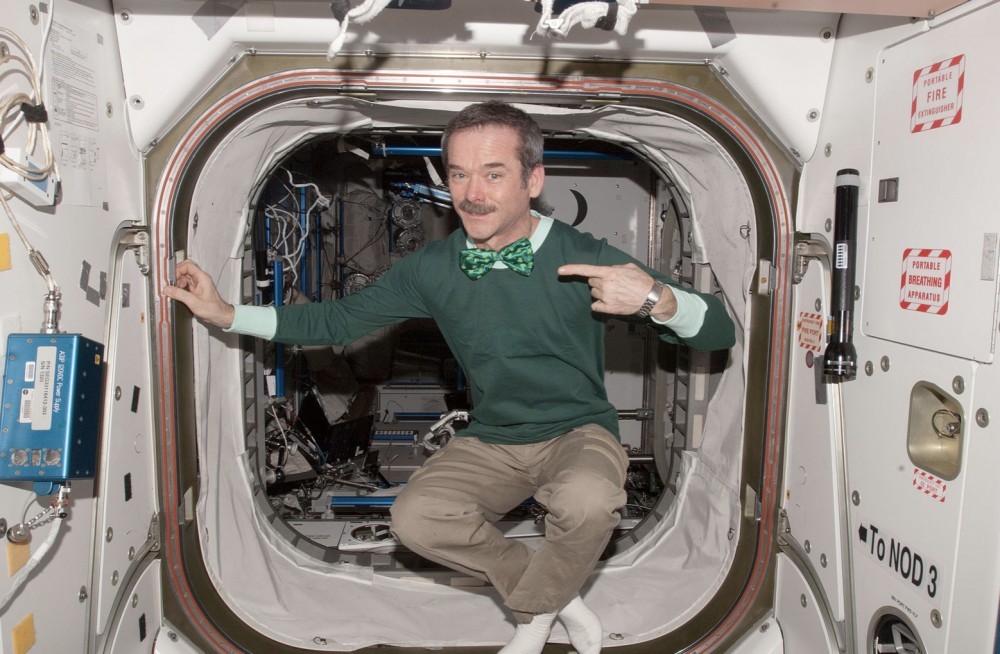 Astronauts have been celebrating St Patrick’s Day in orbit for some time now.  Just because they are not on Earth does’t mean they can’t partake in the festivities!  How can they feel like they are a part of the celebration while in space?

Well, some astronauts have been known to take pictures of Ireland from space and post them on social media throughout the day, while some have played and recorded Irish music while in space as a tribute to the Irish celebration.
In this photo, Canadian astronaut Chris Hadfield shows he’s celebrating St Patrick s Day by dressing in a green sweater and green bow tie while on the International Space Station. Photo Credit: Wikimedia Commons 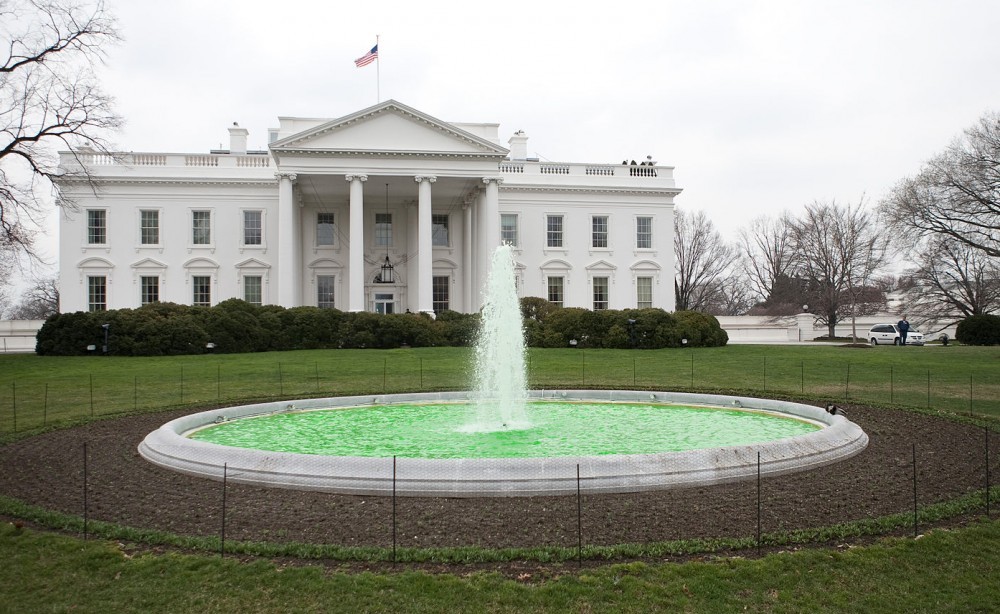 The White House also has its own traditions in addition to the green fountains. The White house hosts the Prime Minister of Ireland.

The President of the United States and the Prime Minister of Ireland typically have a meeting in the Oval Office, enjoy a lunch together, a reception dinner and traditional moment when the Prime Minister gives a bowl of shamrocks to the President. The President also usually uses this opportunity to commemorate how the Irish and Irish American’s have been a blessing to America. 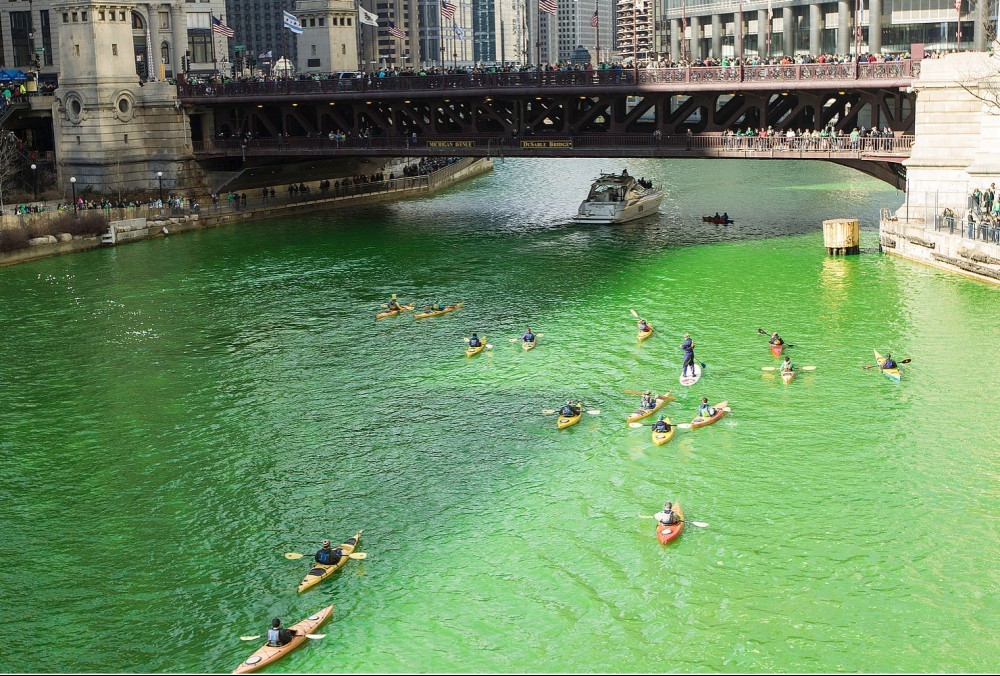 The dying of the river attracts 400,000 spectators each year. 45 pounds of dye is dumped into the river each year to keep it green for approximately five hours.

In addition to the dying of the Chicago River, Chicago also hosts a well attended parade. Photo Credit: Wikimedia Commons

I am sure there are so many more amazing celebrations and traditions not listed here. And more will probably be started as the holiday gains even more popularity.  Do you know of any unique St Patrick’s Day traditions around the world that are not listed here? If so, please do tell (below in the comments)!

Now that I’ve learned about all these interesting traditions, I’d like to visit some of these places during their St Patrick’s Day parades and festivals.  At the top of my list is New York, then New Orleans and Tokyo.  What about you?

Just for fun, I’ll wrap it up with this Irish Proverb: “A good friend is like a four-leaf clover, hard to find and lucky to have.”